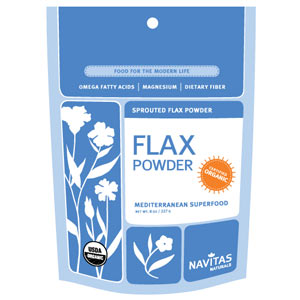 Navitas Naturals Flax Powder is made from sprouted flax seeds—and nothing else. Flaxseeds have a mild flavor and are famous for providing healthy omega-3 fatty acids and fiber. By sprouting the flaxseed and cold-milling it into a powder, we provide optimal opportunity for the body to digest the flax and absorb the nutritional benefits.

The Sprouted Power of Flax
Several traditional healing systems around the world, including Ayurvedic, Brazilian, Chinese, and Canadian folklore, recognize the health value contained in flax. Its culinary use dates to ancient Greece where the seed’s many health benefits were widely praised. Flaxseed continues to be enjoyed and easily incorporated into modern foods, and its optimal nutrition potential is best realized when it is eaten as a sprouted seed powder.

Every part of the flax plant has a long and continued history of economic importance, beginning in the Stone Ages. Widely cultivated by the Egyptians over 5,000 years ago, flax (also known as linseed, and botanically, Linum usitatissimum) is a slender, annual plant with beautiful blue flowers. Flax was initially cultivated for its fiber, which was woven into threads and famously used by the Egyptians. Artifacts found in Egyptian ruins maintain samples of hand woven flax fabric with up to 200 flax threads per square inch.