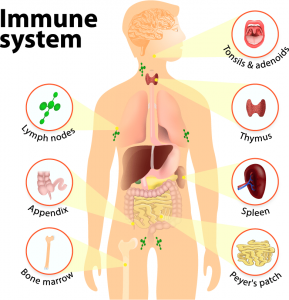 In simple terms, the immune system is a defense system that helps protect the body from invading pathogens, such as viruses and bacteria. It encompasses a diverse group of immune-related cells that can be broadly categorized as either innate or adaptive immune cells, based on their different properties and mechanisms.

Innate immune cells (such as macrophages, neutrophils, and NK cells) serve as the body’s first line of defense against pathogens. Although they are quick to respond to threats, innate immune cells carry out less specific responses to individual pathogens. Conversely, adaptive immune cells (namely T cells and B cells) are slower to respond but produce and respond to antibodies, which enables the immune system to remember past infections for future defense. For example, B cells develop antibodies against the pathogens they encounter, which enable them to respond more efficiently during a second encounter.

Importantly, how well these different immune cells are able to coordinate their activities determines how effectively the host can mount an immune response, and ultimately, their ability to stay healthy.  One of the ways immune cells typically accomplish this task is by secreting cytokines —molecules that attract other immune cells to the site of infection and regulate their activation or suppression.

So, what factors contribute to the quality of a body’s immune response? Although a number of different variables (e.g., age, underlying health, stress levels, sleep habits, etc.) contribute to an organism’s immune health, the importance of proper nutrition cannot be overstated. Let’s discuss some of the nutrients and dietary factors that have been found to have immune-regulatory effects, and benefits for immune health.

When you think nutrition for immune health, your mind probably goes straight to vitamins and minerals, right? Well, not so fast—mother nature has more than a few “tricks” for optimizing immune health up her sleeve. One such trick is increasing your omega-3 intake. Indeed, research indicates that the omega-3 fatty acids eicosapentaenoic acid (EPA) and docosahexaenoic acid (DHA) can promote immune health by reducing cell stress responses that lead to suboptimal health and enhancing the function of immune cells.

Short-term cell stress responses are a normal and necessary physiological response that help the body initiate processes designed to restore damaged body cells and tissues after an injury, infection, or illness. However, if these cell stress responses (often referred to as the body’s inflammatory response) become long-term, they can damage cells and tissues, and ultimately contribute to a variety of chronic health problems.

Check out this great line of Omega 3s from  Nordic Naturals

For more information about omega-3s, including benefits, dietary sources, and dosage recommendations, refer to these articles:

An introduction to Omega-3 fats

Omega-3 dosage: How much EPA and DHA should I take?

Another important way that omega-3s promote immune health is by enhancing the function of both innate and adaptive immune cells. For example, DHA and EPA can help regulate the activities of macrophage cells, which play a critical role in the body’s innate immune defense by patrolling for invading pathogens and working to eliminate them. Omega-3s also promote innate immune function by increasing the number and phagocytic capacity of neutrophil cells—a process wherein the cell essentially destroys a virus or infected cell by binding to it and engulfing it.

Studies also show that EPA and DHA can enhance adaptive immune function by promoting the growth and specialization of certain types of T cells  and increasing the number and percentages of B cell populations in different tissues.

A growing body of research suggests that probiotics—live microorganisms that, when administered in adequate amounts, confer a health benefit on the host—also play an important role in immune health. Although it might be difficult to wrap your mind around how ingesting microorganisms (usually bacteria) can help the body fight off harmful invaders, research shows that these beneficial microbes promote immune health through the activation of multiple immune mechanisms.

For example, one of the ways probiotics promote immune health is by inhibiting the growth of pathogenic bacteria. Probiotics do this in a number of ways, including competing with pathogens for nutrients that promote growth and proliferation, producing substances that kill bacteria or stop their growth, and competing with pathogens for adherence to the intestinal epithelium a cellular layer that forms a physiological barrier against pathogenic microbes and detrimental substances in the intestines. Probiotics have also been shown to support immune health by enhancing barrier function and promoting the survival of intestinal epithelial cells.

Perhaps the most significant mechanism through which probiotics support immune health is by stimulating immune cell activity. More specifically, supplementation with various probiotic species and strains have been shown to:

Check out our selection of Probiotics

This one may not come as a surprise, given that Vitamin D has received an increasing amount of attention in recent years for its role in supporting immune health. And indeed, its reputation as an immune-boosting nutrient is well-deserved. Once championed mainly for its beneficial effects on calcium absorption and bone health, an impressive amount of literature now finds that vitamin D can modulate both innate and adaptive immune responses.

One of the most significant ways that vitamin D supports innate immunity is by stimulating the production of antimicrobial peptides (AMP), which are endogenous antibiotics (i.e., antibiotics that originate within an organism). Secreted by various types of immune cells, these important peptides display a wide range of anti-microbial and anti-viral activities. Evidence of such activities are likely reflected in the results of a clinical trial, which found that supplementation with 1200 IU of vitamin D led to a 42% decrease in the incidence of influenza amongst school-age children.

Further support for the importance of vitamin D comes from numerous studies associating deficiencies in Vitamin D with increased autoimmunity and susceptibility to infection, colds, and flu. In other words, individuals with lower vitamin D levels appear to be more vulnerable to autoimmune conditions and respiratory infections than people with adequate vitamin D status.

Unfortunately, numerous factors (e.g., time of year, use of sunscreen, limited sun exposure, and dark skin pigmentation, etc.) mean that an estimated 42% of American adults are deficient in vitamin D. For this reason, consuming dietary sources of vitamin D or taking a vitamin D supplement are highly recommended—particularly during the winter months when seasonal flu is most common.

Here’s a link to our Vitamin D

In the event of a novel virus, the functioning of your innate immune system (i.e., the quicker but less precise set of immune responses) is particularly important. This is because viral strains continuously undergo genetic mutations, which essentially enables them to evade pre-established adaptive immune responses. In other words, when a virus is new, the likelihood that exposed individuals will have built up the relevant antibodies to combat it is slim. Here’s where our fourth immune-boosting nutrient, melatonin, can help.

Melatonin is a hormone produced by the pineal gland, a small group of specialized cells in the brain. Its primary function is to facilitate sleep onset by communicating to the body when it’s dark. In addition to its regulatory effects on sleep, melatonin is also a powerful antioxidant that helps regulate the main cellular components of the innate immune response. This has been evidenced by studies showing that:

The fact that melatonin facilitates sleep onset further underscores its value as an immune-boosting dietary factor. This is because getting sufficient sleep (~7 to 9 hours for an adult) is one of the best ways to naturally support immune health, while insufficient sleep can leave you more vulnerable to getting sick after being exposed to a virus. For example, research finds that:

During sleep, your immune system releases cytokines (molecules that recruit other immune cells to the site of an infection and regulate their behavior) in order to help combat an infection or inflammation. Conversely, sleep deprivation can decrease the production of cytokines, as well as T cells and infection-fighting antibodies.

Need help falling asleep? Try one of our Sleep Aids

Traditionally known for its beneficial effects on the body’s inflammatory response, curcumin (an orange-yellow spice extracted from the turmeric plant) is a powerful antioxidant with a number of research-backed health benefits. More specifically, research over the past few decades suggests that curcumin can support cardiovascular health, brain function, mental health, and you guessed it, immune system function.

Although not commonly touted for its immune-boosting properties, a growing number of studies find that curcumin can modulate the growth and cellular response of various types of immune cells. For example, studies show that supplementation with curcumin can:

Something to keep in mind when looking to increase your curcumin intake is that curcumin’s poor solubility in water means taking it in its native form results in very low levels of absorption, which can in turn limit its therapeutic benefits. For this reason, looking for an optimized curcumin supplement that circumvents low bioavailability is highly recommended.