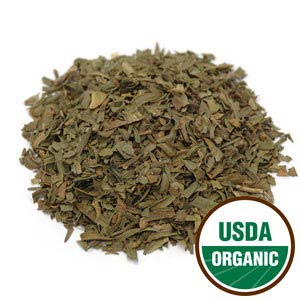 Also known as “dragon's wort” (hence its name), tarragon is truly worthy of its French title, les quatres herbes fines (“the four fine herbs”) that are so important to native parisienne cuisine. Tarragon spice is somewhat similar to anise root in fragrance; it's flavor adds a great deal to lighter dishes such as poultry, fish and eggs. In Slovenia, dried tarragon is actually used in a dessert pastry known as potikah.

The best dried tarragon is the French variety. There is also a Russian variety that is not nearly as flavorful, but from a species that is much hardier. Interestingly, tarragon spice is the basis of a popular carbonated soft drink in much of that country and former Soviet republics such as Armenia and Georgia, known as Tarkhin (the Russian word for tarragon). The Russian variety of organic tarragon can also be eaten raw in salads or cooked as a side vegetable.