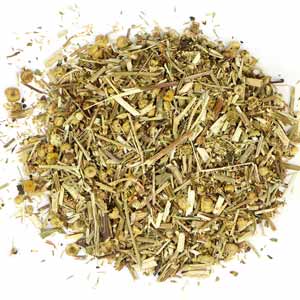 A member of the Asteraceae family, Tanacetum vulgare has serrated, fern-like leaves and bright yellow, button-shaped flowers. Native to Europe and Asia, tansy has a long history of use in traditional European herbalism for its beneficial properties. It has even been employed as a textile dye. Tansy herb can be used in infusions and washes for topical applications.

Tansy is native to temperate climates throughout Europe and Asia. Now an introduced species around the world, tansy is considered invasive in some of the countries where it has taken hold. With that said, this herbaceous perennial with button-like yellow flowers can also be found firmly rooted in many gardens. Tansy has a long history of use extending back to ancient Greece. In traditional folk herbal practices, the herb was often used in infusions and washes for external applications and has even been employed as a textile dye.

Tansy’s botanical name, Tanacetum, is thought to be derived from the Greek, athanasia, translating to “immortality”. While we do not know for certain what the ancient Greeks were referencing, we can speculate. Tansy’s yellow flower heads are long-lasting and its seeds persist through the winter giving the perception of immortality. Additionally, its scientific name could be referencing the historic use of the herb in funeral rites and in preserving the bodies of those who had passed.

Tanacetum vulgare is a member of the Asteraceae family, also known as the sunflower family. The plant has finely divided, pinnate leaves that are fern-like in appearance and alternate up the stem. Tansy produces long-lasting yellow, button-shaped flower heads, each with hundreds of disc flowers embedded within. The aerial portions of the plant are aromatic and often described as camphoraceous with a hint of rosemary. The volatile oil in the leaves and flowers contain thujone, a powerful chemical compound.

Tansy is reported to have been growing in Charlemagne’s gardens as well as those of Benedictine monks. The herb was even worn in shoes in an attempt to repel pests and was employed as a strewing herb, tossed on household floors for its scent throughout the 15th century. Dried aerial portions of tansy should be used for topical preparations. The dried herb can be made into infusions and washes for external use.