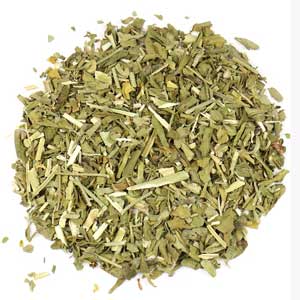 Native to the Mediterranean, Ruta graveolens can now be found growing in gardens around the world. Rue is a hardy evergreen that emits a disagreeable odor. For centuries, it was used as a food spice and for its beneficial qualities in traditional European medicine. Rue was even employed folklorically in the Middle Ages in witchcraft and magic. Bitter in taste, rue herb can be macerated as a tincture, steeped as rue tea, prepared as an external wash, or used sparingly as a culinary spice.

Rue has a long history of use in both medicine and magick, and is considered a protective herb in both disciplines. The hardy evergreen shrub is mentioned by writers from Pliny to Shakespeare and beyond, as an herb of remembrance, of warding and of healing. Early physicians considered rue an excellent protection against plagues and pestilence, and used it to ward off poisons and fleas. A Modern Herbal refers to the plant's 'disagreeable odour and flavour', but in truth, the bitterness of the leaves is only evident in large doses. In smaller amounts, it imparts a pleasant, musky flavor to cream cheeses and light meats. Rue was once believed to improve the eyesight and creativity, and no less personages than Michelangelo and Leonardo Da Vinci regularly ate the small, trefoil leaves to increase their own. The legend of rue lives on in playing cards, where the symbol for the suit of clubs is said to be modeled on a leaf of rue. There are concerns that rue is poisonous and can cause violent gastric reactions when taken in large doses. In addition, some people are highly sensitive to the plant's oils and can develop a severe rash when they are exposed to it and then the sun.

While rue has been used for centuries for both culinary and medicinal purposes, as well as in general use as a strewn herb to discourage pests, many modern herbalists suggest that it should not be taken internally. Despite this concern, small amounts of rue are often used in salads, egg dishes and cheeses in Mediterranean countries. It is one of the most well-known of the magickal protective herbs and is often used in spells of warding and protection in modern magic.